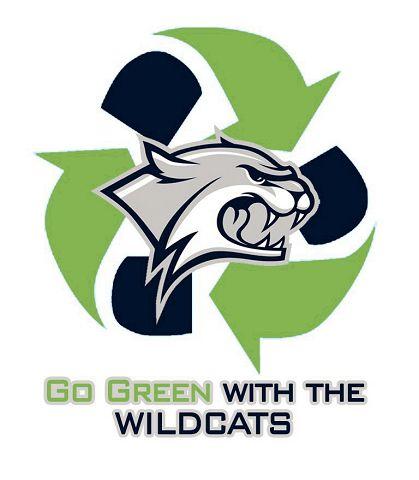 DURHAM—The University of New Hampshire’s Athletics Department and the school’s sustainability office are teaming up to help the UNH Wildcats football team go green this season.

When the team has its home opener on September 5 at Cowell Stadium, fans will be encouraged to dispose of their trash properly and use recycle bins in the parking lot and in, and around, the stadium, according to Amber Radzevich, a spokeswoman with the athletics department.

“For us, it’s a starting point to start having a dialogue about it and make our fans more aware of it,” Radzevich said Wednesday.

She said there will be signs posted around and in the stadium telling fans to take care of their waste and where to dispose of it. Volunteers will also be on hand at the September 5 game to help fans, she added.

Radzevich said the stadium’s public address system will also ask fans to recycle and dispose of waste properly during football games as well as provide information about how many of the athletic department’s corporate partners are also working to go green.

Radzevich said the athletics department really wants to reach fans who tailgate in the parking lot before football games. She said additional trash and recyclable receptacles will be added to the parking area to make it easier for fans to observe more eco-friendly practices.

She said the go green effort is not just limited to the UNH Wildcats football team. She said the athletics department wants it to apply to all of its sporting events and to the vendors that provide services to the program.

“The ‘Go GREEN with the Wildcats’ event will set recycling and sustainability more broadly as the standards that will carry on throughout the year at all athletic events,” said Marty Scarano, the athletics department director. “We are excited to give UNH fans ways to lessen their environmental footprints.”

Wildcat corporate partners will have tables around the stadium displaying their “green” products and services. Some of the featured vendors will include: the Green Alliance, Ultra Geothermal, SEA Solar Store, the Jenaly Technology Group, ReVision Energy, The Fiddlehead Loop, Simply Green, The Green Tee, UNH Energy Club, and the Southeast Habitat for Humanity Re-Store, according to Radzevich.

Courtesy photo The UNH Wildcats football team will encourage their fans to huddle up and go green when the team opens its season Sept 5. at Cowell Stadium in Durham.

“Athletic departments have a unique role to play in not only reducing greenhouse gas emissions and waste, but also in educating players and fans about sustainability through the community building nature of sports,” said Cleaves.

Radzevich said there are thousands of people who attend UNH football, hockey, basketball and other sporting events year-round. Getting them to help the school be more eco-friendly represents an important step toward helping UNH realize its vision for a sustainable campus, she said.

“It’s a no-brainer. We’re in a position where we are ready to do this,” Radzevich said.

Currently, the university has already taken several steps toward realizing its vision to be a sustainable campus.

Some of these steps include the school’s climate action plan, or WildCAP, that has set a goal to reduce the university’s carbon emissions to 50 percent by 2020 and 80 percent by 2050.

UNH is also completing its ECOline project that will allow the campus to meet up to 85 percent of its energy use with landfill gas from the Waste Management Turnkey landfill in Rochester. UNH Dining services also purchases produce from an on-campus organic garden as well as food from 88 local farms and producers.