Student apartments save with geothermal 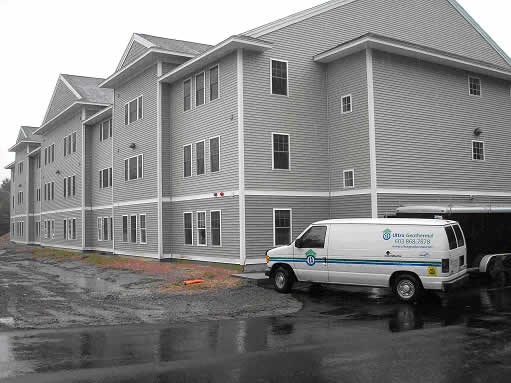 From the outside, the Rivers Edge Apartments, an off-campus student apartment building located in downtown Durham, looks like other similar residences. But it’s anything but. In fact, the apartment building is vastly different using geothermal technology, an alternative energy source that provides the familiar comfort of traditional heating and cooling systems, according to Melissa Aho, president of Ultra Geothermal, Inc. in Barrington.

Jeff White, the original owner of Rivers Edge Apartments and general contractor for the apartment complex, says he opted for geothermal because of the green nature of geothermal and rising fuel costs. “I really liked the idea of it being a green product itself,” White says. “I thought that would go over well with UNH [University of NH] and the college kids that were going to rent from me.”

White contracted Ultra Geothermal for the project because he had used them before for forced hot air systems in residential properties he had built.

Upon completion, the three-story complex offers 48 two-bedroom units allowing for a maximum occupancy of 96 students.

“The first winter that we went through, in January, when it was very cold I was over there all the time checking the system and seeing how it was running and we had no issues at all,” White says. “It was negative [temperatures] sometimes at night and the system was fine handling that cold temperature and dealing with the high demand.”

Geothermal heating and cooling systems reduce the carbon footprint of a building. “There was a huge savings in monthly expense, “ White says. In addition, White received a tax credit for installing the system and the building was approved as an energy star building, which added to the rebate.

Aho says, “My assumption is that the geothermal usage in the building is about 65,000 kwh per year; which would cost about $10,400. I also would assume that if they were to be on fossil fuels they would have an average usage of 10,000 gallons of fuel, which would cost close to $30,000. It would also emit more than three times the amount of CO2 into the environment.”

How exactly does this break down? According to Aho, 10,000 gallons of oil per year creates 222,810 lbs of CO2 per year compared to the geothermal electric of 65,000 kwh per year that emits roughly 97,480 lbs of CO2 per year. Utilizing the geothermal ground source units creates a savings of 125,330 lbs of CO2 that is not being released into the environment, which is equivalent to taking 26 cars off the road completely. While 26 cars may not seem like a lot when driving through the crowded streets of Durham on any given day when school is in session, however, the more geothermal is used, the greater the savings become.

“I know that does not seem like a lot but if you were to think of the impact if every dorm on the whole UNH campus would have,” Aho said. “Currently there are over 30 dorm complexes on UNH campus in Durham. Now you are looking at taking 700 cars per year off the road if they were to be converted to geothermal heating, which is equivalent to 2,000 tons of CO2 that would not be going into the environment. That is when we will start to make a difference.”

As part of its efforts to help the UNH community and other seacoast residents become more sustainable with their home heating and cooling, Ultra Geothermal is also a business partner with the Green Alliance. The Green Alliance is a union of environmentally conscious businesses and individual members which educates the public on more sustainable business and buying practices.

“If you are looking to reduce your carbon footprint in the world, your home is a great place to start,” Aho says. “Geothermal energy is clean, renewable and ultimately affordable. In addition, the Federal government offers significant tax incentives for homeowners who invest in geothermal heating and cooling systems.”

To learn more about the Green Alliance, visit www.greenalliance.biz.